Manchester City plan to make a formal offer for Jack Grealish after Euro 2020, while Aston Villa have opened contract talks with their captain.

Villa will not welcome any approach for the 25-year-old and it is understood they have received no bids for the England international so far.

City want to sign Grealish but their priority is signing a striker this summer, with their top targets Harry Kane and Erling Haaland.

The Premier League champions made a £100m bid for Tottenham striker Kane earlier this week.

Meanwhile, Villa opened talks with Grealish over a new and improved contract at the end of last week, with talks ongoing.

The club are adamant they want to build a team around Grealish, who joined the club he supports at the age of six, and their summer recruitment plans – having already signed Emi Buendia and Ashley Young – are based on players who will play with him.

Pep Guardiola is an admirer of Grealish, who has four years left on his current contract, and City would need to sell players if they wanted to sign Kane or Haaland as well as the Villa skipper.

“Jack Grealish is going to be hot property this summer. Lots of clubs would like to sign him, but he has a long-term contract and Villa do not want to sell him.

“It is unlikely City would sign a striker of the calibre of Kane or Haaland, and Grealish as well. The only way that could happen is if they sold players.

“Do Villa want to sell Grealish? The answer is a resounding no. He’s their captain and has four years left on his contract.

“We know Grealish will be talked a lot about this summer, we know a lot of clubs want to sign him, but in transfer sagas you have to look at who holds the power.

“At the moment, that is Villa. Yes City like him, Guardiola is an admirer, but it’s going to be very difficult to get him.”

What does Grealish offer City?

There has been a national clamour for Grealish to start for England after the 25-year-old shone for a second successive season in the Premier League with boyhood club Aston Villa.

Grealish defines a ‘talisman’, but he also possesses exceptional close control, which drew a league-high 110 fouls last term, some 22 more than any other player – a staggering statistic when you consider he missed a third of the season through injury.

If you look closer, in terms of goal creation per 90, Grealish belongs to a ruling class of two: the only player to register superior numbers last season was potential future team-mate Kevin De Bruyne.

What happens to Raheem Sterling if City sign Grealish? Both players prefer operating down the left channel, but the former can also cover up top, while the latter can be used in a No 10 role – so there could be room for both at the club.

The graphic below compares both players against wingers in Europe’s top leagues and emphasises how Grealish was among the elite for assists, big chances created, fast breaks, fouls won and passes in the final third. 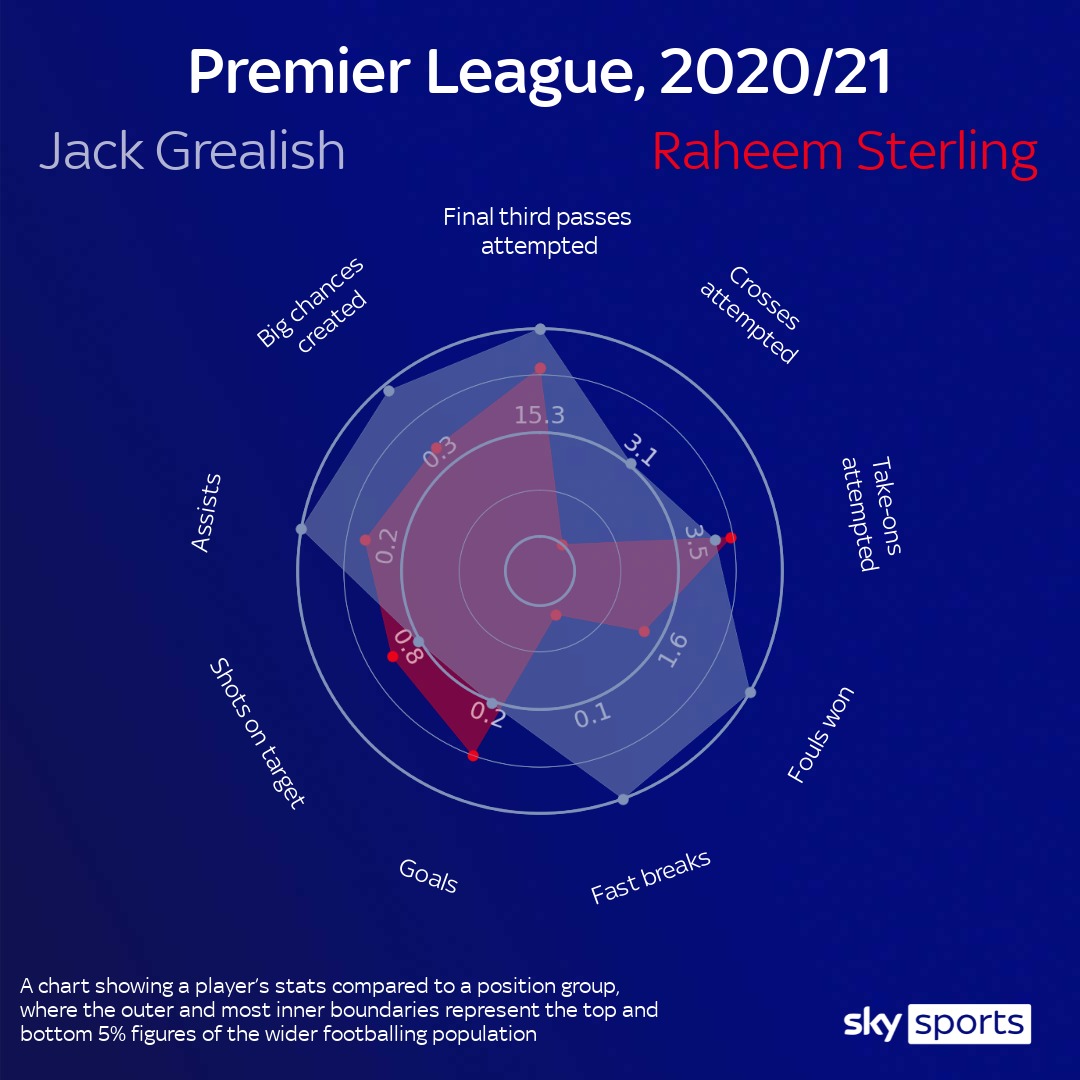 But Grealish would also offer City so much more. As the interactive table below shows, no current City attacker comes close to the Villa captain for duels and fouls won, which would further strengthen Guardiola’s customary high press and threat from set-pieces.

Sterling offers a greater goal threat, and De Bruyne is arguably the league’s finest passer, while Grealish blends the best of both but his ability to take on defenders and create pockets of space to exploit is unrivalled.

Sky Sports’ Graeme Souness says if Kane is ever going to leave Spurs, it has to be this summer.

“There are two prizes out there: Haaland and Kane,” Souness said in May.

“With Haaland, there is still a question mark, but that is getting smaller with every week. With Harry, there are no question marks.

“But I think for Harry Kane, it is this year or never.

“I don’t think that [£200m] would be outrageous. I don’t think Pep is being entirely honest when he says they won’t go big this year. I think they will.”

Rivalries in international football don’t get any bigger than England versus Germany. With the two nations set for a collision course in the last-16 of Euro 2020, Sky Sports pundit Jamie Redknapp and Uli Kohler joined Peter Smith to analyse both camps ahead of Tuesday’s showdown at Wembley.

PART 1 | Jamie Redknapp, a member of the England squad dumped out of Euro 96 by Germany, assesses the Three Lions’ performances in the group stages of Euro 2020 and explains why Gareth Southgate’s talented squad have nothing to fear against the Germans.

PART 2 | The prospect of facing England at Wembley is one every Germany player will relish irrespective of an inconsistent group stage, according to Sky Germany reporter Uli Kohler, who talks tactics, Jamal Musiala, Jadon Sancho and the dreaded prospect of penalties with Peter in part two.