US Vice President Kamala Harris’s office was engaged in damage control Thursday after she did not push back against a university student who accused Israel of “ethnic genocide.”

Two Jewish groups said Harris’s aides had reached out to assure them of the vice president’s pro-Israel bonafides and POLITICO reported that Democratic Rep. Ted Deutch, who is Jewish and a vocal Israel advocate in Congress, received a similar call.

Democratic Majority for Israel, a centrist group seeking to bolster support for the Jewish state in the Democratic Party, said in a statement, “We were pleased Vice President Harris’s senior staff reached out to us today to confirm what we already knew: Her ‘commitment to Israel’s security is unwavering,’ and she ‘strongly disagrees with the George Mason student’s characterization of Israel.’”

“DMFI appreciates the strong support both President Biden and Vice President Harris have given to issues that inspire our members,” the statement added.

Anti-Defamation League CEO Jonathan Greenblatt tweeted, Just spoke with @VP office. Glad to hear her confirm she is proud of her record supporting Israel and knows [the] claim [that] it is committing ‘ethnic genocide’ is patently false. Looking [forward] to a clearing of the record so there’s no ambiguity that what that student said was hateful/wrong.”

A source familiar with the correspondence between Harris’s and Deutch’s offices told POLITICO it was “fair to say that the group of House Democrats that super care about this noticed it and talked about it.”

Harris gave a talk about voting rights on Wednesday to a class at George Mason University in Virginia, then took questions from the students, one of whom said “a lot of taxpayer money is allocated for funding the military, whether it’s in backing Saudi Arabia or in Palestine.”

The student went on to note what she described as “astronomical numbers” at pro-Palestinian protests over the summer, apparently referring to demonstrations during the May conflict between Israel and Gaza terror groups.

“But then just a few days ago there were funds allocated to continue backing Israel, which hurts my heart because it’s an ethnic genocide and a displacement of people — the same that happened in America — and I’m sure you’re aware of this,” she said.

The US House of Representatives last week approved $1 billion in funds for Israel’s Iron Dome missile defense system in a 420-9 vote. The measure, which the Biden administration supports, must still be approved by the Senate.

The student ended her remarks by saying, “I just feel like I need to bring this up because it affects my life and people I really care about…” 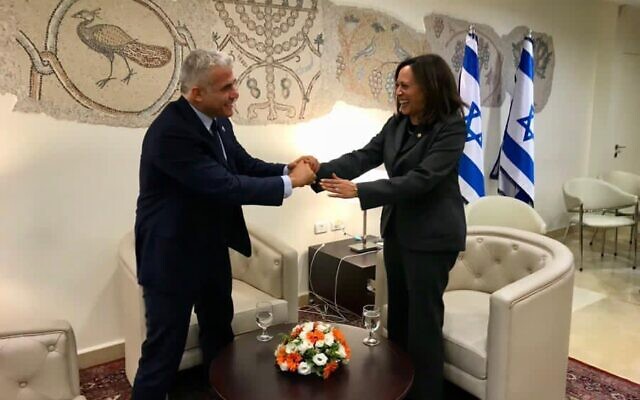 “I’m glad you did,” Harris said in response. “And again this is about the fact that your voice, your perspective, your experience, your truth should not be suppressed and it must be heard, right? And one of the things that we’re fighting for in a democracy, right, a democracy is its strongest when everybody participates…”

She added soon after: “The point that you are making about policy that relates to Middle East policy, foreign policy, we still have healthy debates in our country about what is the right path, and nobody’s voice should be suppressed on that.”

There was no later comment from the vice president’s office on the exchange, which was criticized by some Republican figures.